Austin Brice designated for assignment (Warning: Thread has nothing to do with Brice)

FishFan95 said:
Also, this analysis of player value is deeply flawed. The "surplus value" does not generate $105 M in additional revenue. The Marlins could not cash Yelich in for a check worth $109 M. There is no basis other than an averaging of FA WAR values relative to their contracts. The largest AAV ever on a FA contract was Garrett Cole's $36 M. Is anyone projecting that he will finish with a WAR of 4? Is anyone projecting that Rendon or Strasberg are going to finish with a WAR of under 4?

The reason why 1 WAR is so expensive on average is because of the players that perform dramatically under expectations that weigh down the WAR outputs. Replacing Yelich's production would not cost $105 M more than his contract value.
Click to expand...

We have too monetize production and surplus value to be able to assess it. Is it flawed? Absolutely. Is it the best we got? Yes, but I'll be interested in seeing an alternative way if you want to present something.

How about this. You have $58 million to spend (Yelich's contract) and you need to produce 25 WAR - that's what Yelich was going to do.

Pick MLB FA contracts this offseason. Also, you need to do this over 5 players max (Yelich's year of control) because we can't nickel and dime by scouring for $1-2 million deals because there is IMMENSE value in getting chunk production out of 1 roster slot like Yelich.

Bro the heat around here lately is unbearable.

Never seen Lou get so heated before.

Michael said:
Never seen Lou get so heated before.
Click to expand...

SilverBullet said:
Bro the heat around here lately is unbearable.
Click to expand...

Bro, you posted on the message board instead of emailing your landlord again.

SonOfJack said:
Bro, you posted on the message board instead of emailing your landlord again.
Click to expand...

How do you know my landlord isn't a member here?

Would somebody just change the title of this thread to anything but "Austin Brice" related ?

taiwanmarlin said:
Would somebody just change the title of this thread to anything but "Austin Brice" related ?
Click to expand...

Michael said:
Never seen Lou get so heated before.
Click to expand...

Big picture - we need to hold the front office to the standard of an actual MLB front office and not be apologetic for giving us a terrible product for almost 15 years.

You can buy trading Stanton with a 3 year opt out and being owned $250 million or whatever, which he'd only option if he was hurt so you're fucked either way in losing him or paying him

You can buy trading Realmuto with 2 years of control, as it's dicey to give a catcher a deal into his mid 30s if he was extended. They wear down.

You can buy trading Ozuna with 2 years of control, because he rejected the same deal Yelich got

You can buy trading Dee Gordon and if you want to see me heated, please someone tell me that was dumb

5 years of Yelich and his average salary is under $12 million, coming off two seasons where he averaged a 5 WAR, under 26 years old?

We need to stop this nonsense.

The rebuild has been pretty fantastic on paper - except they blew the biggest move with Yelich. They gave up so much value at the time of trade it's painful, let alone what's happened since. It set them back at least 1, likely 2, years. That's how good he is and we should hold them to the fire until they make up for it. They haven't yet. Not even remotely.

MarlinsLou said:
if you want to see me heated, please someone tell me that was dumb
Click to expand...

MarlinsLou said:
You can buy trading Dee Gordon and if you want to see me heated, please someone tell me that was dumb
Click to expand...

This really amazes me. Not only was Brett Graves picked up in the Rule 5 draft even though his numbers were garbage, he’s still on the 40 man roster.

It almost seems like they forgot he’s on there.

canada-marlin24 said:
This really amazes me. Not only was Brett Graves picked up in the Rule 5 draft even though his numbers were garbage, he’s still on the 40 man roster.

MarlinsLou said:
Who gives a shit about 2018 and 2019? It was a rebuild? They would have a top 20 player in baseball for a contending window right when the rest of the team starts peaking in 21-22. You don't trade these players under any circumstance.

Who cares about having some weaker picks in the draft versus one of the top players in the league - and that's before Yelich exploded? Really?

Are you serious right now? Do you see what you are typing?
Click to expand...

Let me be more clear with this post. There is a difference between the value of a win and the cost of a win. Not all wins have equivalent value. Each additional win is more valuable than the last. Win number 70 is more valuable than win number 60, win number 90 is more valuable than win number 80, etc. Additionally, every time you pass a team in the standings you lose draft value. Since draft value drops precipitously after the first pick, even going from #4 to #8 (Which would happen if you added 5 wins to the 2018 Marlins) would lose $8.9 M* plus more from other picks down the line. You will not convince me that wins 64-68 are worth the $8.9 M+ lost in the draft.

Now as you can imagine, with wins becoming more valuable as you get better and draft picks getting less, there comes a point where it makes sense to forego the picks to improve the team. However, 2018 was not that time. Neither was 2019 or will 2020. The Marlins will not be ready to contend until 2021 at the earliest. This was true before the Yelich trade as well. So I agree with you when you say "Who gives a shit about 2018 and 2019?" Yelich's value in those seasons would be irrelevant. They would not get us to the playoffs and they would cost us in drafts. And since not all wins have equal value, the value gained by an estimated 5 wins would not be enough to overcome this.

I also wanted to mention that I agree that there is surplus value and a high cost to wins on the FA market, but I will get into that in another post.

Now I agree that the trade has been a disaster, but I prefer to not use a revisionist lens when examining it. I will use only the data available at the time. I will even use the data that you sited from fangraphs, even though I am skeptical of their wins cost evaluation:

Now for the prospects:
Just like with Yelich, everything that they do would before 2021 would be irrelevant since it will not help the team in any real way. Brinson could have gotten an extra year of service by holding him back by around a month. This would give him 4 years left come 2021. Since the other three were expected to debut in 2019, the Marlins could use the same service time manipulation to give each 5 more years by 2021. (I will assume that the projected value is constant each season even though it tends to rise each season as they develop towards their respective peaks.)


So, based the fact that the Marlins would be entering a rebuild and at least three of Yelich's years would be wasted, it only made sense to evaluate the projected value of the later years when the Marlins window of contention would begin. This is why the trade was fair value and wasn't the "dumpster fire on day one" like you claim. You need to critically analyze the individual situation and its unique aspects rather than just copy and paste some numbers you find on fangraphs. 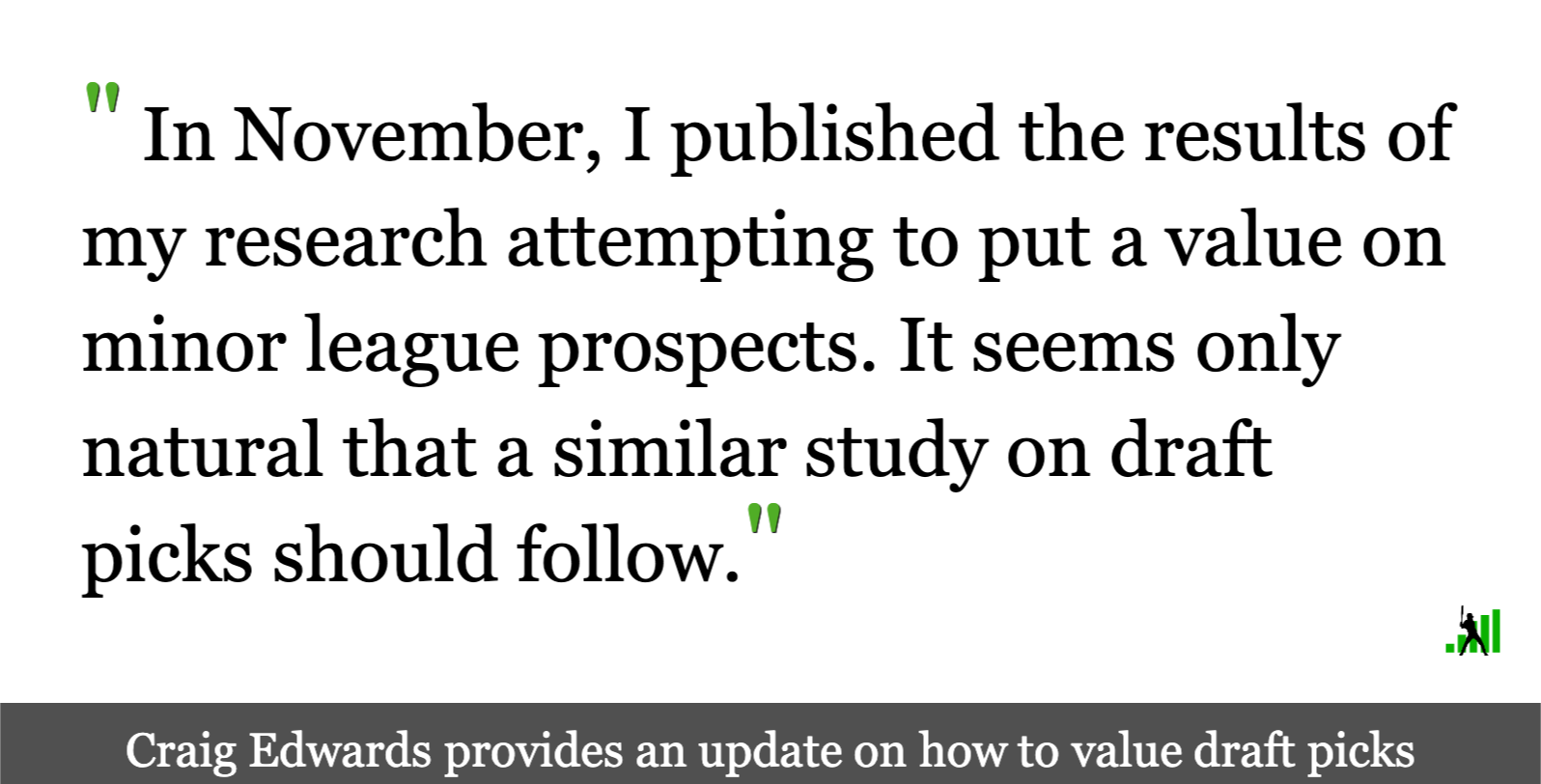 An Update on How to Value Draft Picks

An update to Draft Pick Valuation.

Anybody who reasons and/or calculates using the value and/or benefit of losing has a loser mentality.