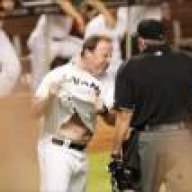 You just saw it.

If JT vacates the DH spot to go into the field, the pitcher then becomes part of the batting lineup, taking Knapp's spot in this case.