I get what you're saying.   But if we're going to have a legitimate discussion about her performance, you can't just ignore a positive because it's a "no-brainer".  She could've not done it, 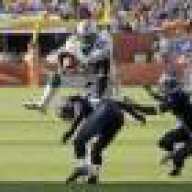 I made a New Years resolution to be proactive, so here you go.  Kim was handed a roster packed full of SP assets and had 1 job; fix the offense. She botched the Starlin Marte deal, replaced Adam

By marlins_09,
May 4 in Miami Marlins