Thoughts on the first half and moving forward. 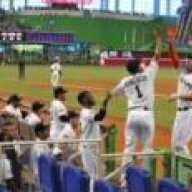 By NOTtheILMarlins,
July 9, 2012 in Miami Marlins