Should the Miami Marlins consider a Tim Tebow Trade? 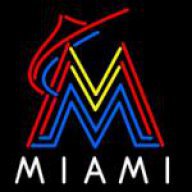 By jeffbakercircus
May 24, 2018 in Miami Marlins